Home Yoga What is Kundalini? 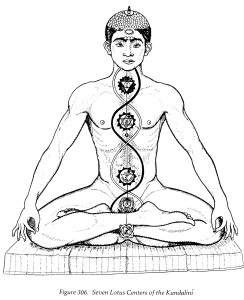 Kundalini is a Sanskrit word meaning “coil” and is ofter depicted as a coiled serpent at the base of the spine. Kundalini energy lies dormant in the perineum, forming a 3 and 1⁄2 circles coil. It is the goal of many yoga traditions to awaken the Kundalini. These yoga traditions believe that the Kundalini is the power that is required to attain the ultimate goal of spiritual achievement, the union (or “yoga”) with the divine.

Awakening the Kundalini energy is generally a very long process. Some people have spent decades of dedicated practices without being able to awaken their Kundalini. For those who were lucky enough to have their Kundalini awakened, the cleansing process of the Kundalini can still decades. Kundalini requires years to purify, open and develop a chakra completely, and the process is done in a bottom up, sequential order. So, as the Kundalini starts at the lowest chakra it may spend a few years at the base chakra, it may take decades before the Kundalini can start working at the crown chakra, the 7th chakra. In most cases, one may not live long enough to achieving the final goal of the process since the time required can be long.