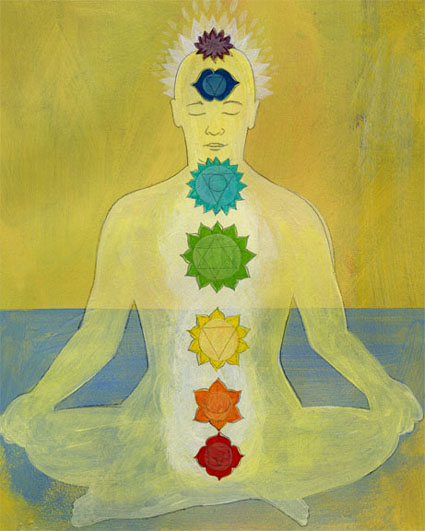 Chakras are energy centers of the body which govern the subtle, psychosomatic aspects of our inner being. Each of these centers correlates to major nerve ganglia branching forth from the spinal column. In addition the chakras also correlate to levels of consciousness, archetypal elements, developmental stages of life, colors, sounds, body functions, and much, much more. Chakra is a Sanskrit term means wheel or disk, and when the chakras are awakened, they turn in a clockwise direction. The chakras open up like flowers and pour out their qualities re-establishing our inner balance and restoring our health and form. Chakras are first mentioned in the Vedas, the ancient Hindu texts of knowledge. Of the many chakras within the human body, seven have been identified as major. In yoga we sometimes refer to the aura as the eighth chakra. They seven main chakras are discussed in more detail below.

Chakra Seven: Sahastrara
Thought, Universal identity, oriented to self-knowledge This is the crown chakra that relates to consciousness as pure awareness. It is our connection to the greater world beyond, to a timeless, spaceless place of all-knowing. When developed, this chakra brings us knowledge, wisdom, understanding, spiritual connection, and bliss.

Chakra Six: Ajna or Agnya
Light, Archetypal identity, oriented to self-reflection This chakra is known as the brow chakra or third eye center. It is related to the act of seeing, both physically and intuitively. As such it opens our psychic faculties and our understanding of archetypal levels. When healthy it allows us to see clearly, in effect, letting us “see the big picture.”

Chakra Five: Vishuddhi
Sound, Creative identity, oriented to self-expression This is the chakra located in the throat and is thus related to communication and creativity. Here we experience the world symbolically through vibration, such as the vibration of sound representing language.

Chakra Four: Anahata
Air, Social identity, oriented to self-acceptance This chakra is called the heart chakra and is the middle chakra in a system of seven. It is related to love and is the integrator of opposites in the psyche: mind and body, male and female, persona and shadow, ego and unity. A healthy fourth chakra allows us to love deeply, feel compassion, have a deep sense of peace and centeredness.

Chakra Three: Nabhi or Manipura
Fire, Ego identity, oriented to self-definition This chakra is known as the power chakra, located in the solar plexus. It rules our personal power, will, and autonomy, as well as our metabolism. When healthy, this chakra brings us energy, effectiveness, spontaneity, and non-dominating power.

Chakra Two: Svadisthana
Water, Emotional identity, oriented to self-gratification The second chakra, located in the abdomen, lower back, and sexual organs, is related to the element water, and to emotions and sexuality. It connects us to others through feeling, desire, sensation, and movement. Ideally this chakra brings us fluidity and grace, depth of feeling, sexual fulfillment, and the ability to accept change.

Chakra One: Muladhara
Earth, Physical identity, oriented to self-preservation Located at the base of the spine, this chakra forms our foundation. It represents the element earth, and is therefore related to our survival instincts, and to our sense of grounding and connection to our bodies and the physical plane. Ideally this chakra brings us health, prosperity, security, and dynamic presence.