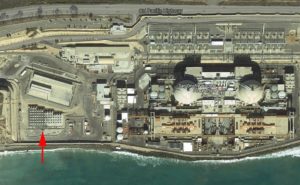 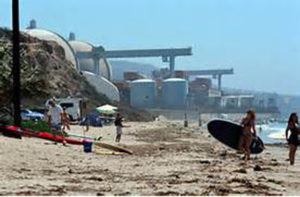 In Southern California, a highly populated community between San Diego and Orange County are concerned about the Edison energy company’s plans to store radioactive waste 100 feet from the Pacific Ocean at the San Onofre Nuclear Power Plant site. The San Onofre Nuclear Power Plant is located next to the Rose Canyon fault line, that runs along the shoreline, and has the potential of a 7.4 quake. More than 8.5 million people live within fifty miles of the power plant.

According to Gary Headrick, co-founder of the San Clemente Green Org, reports: “The California Coastal Commission (CCC) approved Edison’s plan to partially bury nuclear waste in silos only inches above the rising sea level, 100 feet from the ocean, protected by a crumbling 15-foot sea wall, (a hearing is scheduled for April 14, 2017). One canister holding used fuel assemblies contains more radiation than was released at Chernobyl. Currently, about fifty “Chernobyl Cans” are being stored, with another hundred to come out of pools.”

State and federal regulators have approved the new storage plan, which includes storing nuclear waste in so-called dry-storage canisters. Edison said the protocol is safe. But critics aren’t convinced which cite reports of potential leaks, the effects of rising sea levels and that the storage site is vulnerable to earthquakes and tsunamis. San Onofre was shut down in 2012 after the discovery of a radioactive leak.