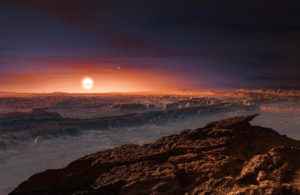 The exoplanet (a planet outside our Solar System) was found orbiting Proxima Centauri and has been given the name Proxima b, making it the closest known exoplanet to earth. This artist rendering provided by the European Southern Observatory shows a view of the surface of the planet Proxima b orbiting the red dwarf star Proxima Centauri, the closest star to the Solar System.

AP report – After scanning the vast reaches of the cosmos for Earth-like planets where life might exist, astronomers have found one right next door.

A planet that’s rocky like Earth and only slightly bigger has been discovered orbiting Proxima Centauri , the nearest star to our solar system, scientists reported Wednesday. It is probably in the not-too-hot, not-too-cold Goldilocks Zone where liquid water — a key to life — is possible, if the planet has an atmosphere.

It is easily the closest potentially habitable planet ever detected outside our solar system — and one that could be reachable by tiny, unmanned space probes before the end of the century, in time for some people alive today to witness it.